Hours after former PTI leader Major (retd) Khurram Hameed Rokhri made revelations regarding his meeting with a senior army officer, former information minister Fawad Chaudhry questioned who he was.

“Who is this?” asked the senior PTI leader in response to a clip of journalist Hamid Mir’s program Capital Talk with Rokhri.

Interestingly, on Friday morning, an account with Rokhri’s name on Twitter uploaded an image of him with Fawad. It was unclear if the account belonged to the retired army officer. 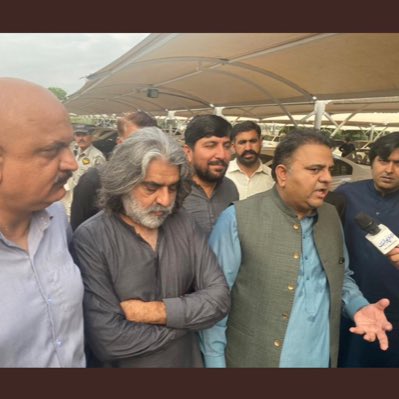 Speaking during Geo News programme Capital Talk, anchored by Hamid Mir, Rokhari said the officer was two-course junior to him and knew him the way Hamid Mir knows about fellow journalist Saleem Safi. He said a bunch of sycophants surrounding “poor” Imran had brought him to this juncture, adding he does not pay heed to those sincere to him, including his sisters.

Narrating details, he said at a meeting at Bani Gala, it was said the general officer was tasked with crushing Imran Khan’s narrative and the PTI. However, Rokhri said that he interjected in the meeting and told the PTI leadership that the officer was a thorough professional and a man of principles who would not sell his conscience and honour to please anyone.

Rokhri said that when he asked the officer if he had been tasked with crushing the PTI, he responded, “What are you talking about; don’t you know me? I was posted (to this office) on Gen Sarfraz’s martyrdom day. Imran is the leader of the country’s largest political party and a hero. Why would I go against him? If some people are telling Imran things like this, tell him there is nothing like this.”

The PTI leader said he conveyed what the officer said to Imran, adding that on his suggestion, the officer was also willing to meet the PTI chief.

Rokhri said he met the officer again, who said, “You people should continue with your struggle. If any obstruction comes from our side, we would answer (be answerable). You people should stop calling names to generals and martyrs.”

The PTI leader also told Mir that he met the officer for a third time, along with Salman as Imran’s spokesperson. He added that the meetings with the officer took place after Shahbaz Gill’s incident.

Rokhri said that when Salman asked for yet another meeting, he suggested that the PTI chief meet the officer.

“The PTI sent me the conditions for talks, which I forwarded to the persons being named. They agreed to meet but suggested a place other than theirs or ours.”

He said he wanted to normalise the situation but refused, telling them (PTI leaders) that he would not be part of the game they had started. He quipped, “Hasn’t Alvi Sahib arranged the meeting?”

The PTI leader said he spoke the truth about the general officer on a TV channel, but the abusive brigade started targeting him. He added that Faisal Vawda was also sincerely trying to defuse the situation, but the “abusive brigade” went after him.

Rokhri also questioned the narrative the party is building in the long march, adding that the PTI chief’s strength was the people’s votes, not a mob which could help him form the government.

Pakistani users will no longer be able to download Google Play Store services from 1st Dec, 2022

Imran Khan arrives at Nur Khan air base in a private...

Pakistani users will no longer be able to download Google Play...

Sevak – The Confessions, all-set to shake audiences from 26/11Eight Stories,...

Imran Khan arrives at Nur Khan air base in a private...

Pakistani users will no longer be able to download Google Play...

Urdu Carol sung at Christmas Ceremony at Cathedral of the Good...

Stolen assets of developing countries must be returned unconditionally: PM